Thomas Jefferson said, “If the American people ever allow private banks to control the issuance of their currencies, first by inflation and then by deflation, the banks and corporations that will grow up around them will deprive the people of all their prosperity until their children will wake up homeless on the continent their fathers conquered.”
The Federal Reserve System is the third central banking system in United States history. The First Bank of the United States (1791–1811) and the Second Bank of the United States (1817–1836) each had a 20-year charter. President Andrew Jackson ended the Second Bank of the United States, and as the result of his efforts, the US economy experienced 70 years of un- interrupted growth even during the Civil War of 1861-1865. If President Andrew Jackson had remained in office for a 3rd and 4th term, US would NOT have had a series of one term presidents leading to the Civil War. The media of those times, created a devastating moral campaign against President Andrew Jackson and his immoral (!) support for his wife Rachel and the socialite Margaret Eaton, to the point that even his VP John C. Calhoun abandoned President Jackson. At the outset of the Civil War, people were regretful for not having President Jackson around because people believed he could have stopped the Civil War.
But then in and around 1907, those who were behind the first two Banks of United States, seduced and bought off Senator Nelson W. Aldridge. He was close to J. P. Morgan and his daughter wedded John D. Rockefeller, Jr. 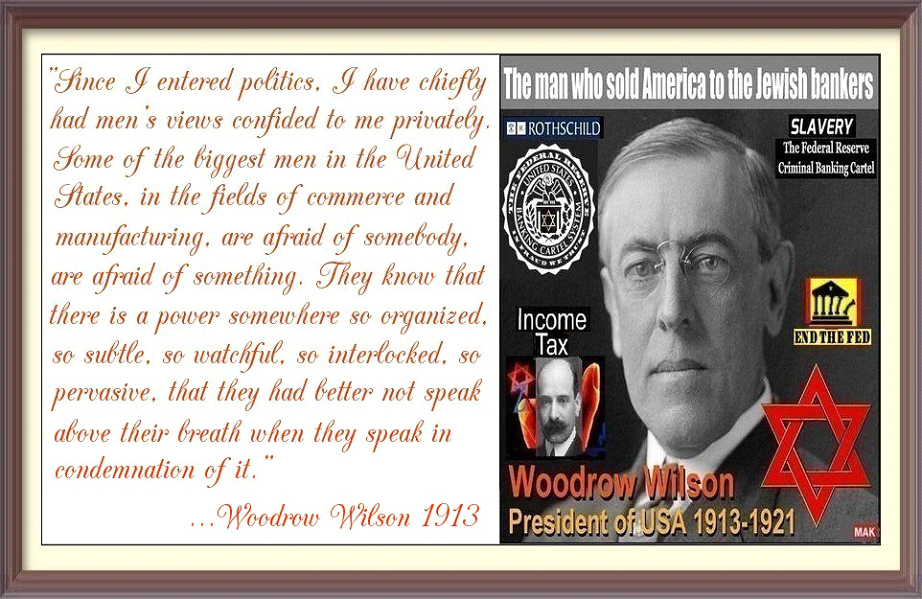 In 1910, Aldrich and executives representing the banks of J.P. Morgan, Rockefeller, and Kuhn, Loeb & Co., secluded themselves for ten days at Jekyll Island, Georgia. The executives included Frank A. Vanderlip, president of the National City Bank of New York, associated with the Rockefellers; Henry Davison, senior partner of J.P. Morgan Company; Charles D. Norton, president of the First National Bank of New York; and Col. Edward M. House who would later become President Woodrow Wilson’s closest adviser and founder of the Council on Foreign Relation. Paul Warburg of Kuhn, Loeb, & Co. directed the proceedings and wrote the primary features of what would be called the Aldrich Plan. Warburg would later write that “The matter of a uniform discount rate (interest rate) was discussed and settled at Jekyll Island. This meeting was kept as a secret until three years after the Illegal Federal Reserve Bank was established.

Close to the Christmas Eve of 1913, The Federal Reserve Act passed Congress in December, 1913. The bill passed the House by an overwhelming majority of 298 to 60 on December 22, 1913 and passed the Senate the next day by a vote of 43 to 25, An earlier version of the bill had passed the Senate 54 to 34, but almost 30 senators had left for Christmas vacation by the time the final bill came to a vote. Most every Democrat was in support of and most Republicans were against it.
Republican Representative Charles Lindbergh Sr. of Minnesota, one of the most vocal opponents of the bill, who on the day the House agreed to the Federal Reserve Act told his colleagues:
“But the Federal Reserve Board has no power whatever to regulate the rates of interest that bankers may charge borrowers of money. This is the Aldrich bill in disguise, the difference being that by this bill the Government issues the money, whereas by the Aldrich bill the issue was controlled by the banks…Wall Street will control the money as easily through this bill as they have heretofore.”(Congressional Record, v. 51, page 1447, Dec. 22, 1913)
Republican Congressman Victor Murdock of Kansas, who voted for the bill, told Congress on that same day:
“I do not blind myself to the fact that this measure will not be effectual as a remedy for a great national evil – the concentrated control of credit…The Money Trust has not passed [died]…You rejected the specific remedies of the Pujo committee, chief among them, the prohibition of interlocking directorates. He [your enemy] will not cease fighting…at some half-baked enactment…You struck a weak half-blow, and time will show that you have lost. You could have struck a full blow and you would have won.” He further said: “You allowed the special interests by pretended dissatisfaction with the measure to bring about a sham battle, and the sham battle was for the purpose of diverting you people from the real remedy, and they diverted you. The Wall Street bluff has worked.”
William Jennings Bryan who at some point advocated for a Government Controlled Central Bank, had become disillusioned with the Federal Reserve Banking system. In the November 1923 issue of “Hearst’s Magazine” Bryan wrote that “The Federal Reserve Bank that should have been the farmer’s greatest protection has become his greatest foe.”
While a system of 12 regional banks was designed so as not to give eastern bankers too much influence over the new bank, in practice, the Federal Reserve Bank of New York became “First Among Equals.” The New York Fed, for example, is solely responsible for conducting Open Market Operations, at the direction of the Federal Open Market Committee. Democratic Congressman Carter Glass sponsored and wrote the eventual legislation, and his home state capital of Richmond, Virginia, was made a district headquarters.